How to spam Google News

This is a story that I'm convinced will cause some significant ripples in general, and for Google in particular. But I've learned that it's a subtle story by demonstrating the phenomenon to friends -- it takes a few minutes to explain what's going on. So if you're reading this blog entry, let me give the punch line up front: You can insert your own "news article" into Google News, for thousands or millions to discover and read.

Pretend you'd like to appear in the news. Imagine that there might be a way for you to write a story -- a story about anything, any topic under the sun -- and have your tale appear in a news archive.

It turns out that you can. It's trivial. Just type your story into one of the Internet-based "PR agencies" that Google News includes in its index, and poof, your story is part of the news.

You'll have to read the story to learn how this works.

Several months ago I happened to be in Chicago when a Southwest Airlines jet ran off the runway at Midway, killing a boy. National media were obsessed with the story; Chicago TV and newspaper outlets were especially so. Watching the news unfold, I wondered how long local and national media would pay attention, so I set up a Google News alert for "Southwest Airlines".

To my surprise, Google News soon alerted me to this:

Condolences for the Tragic Southwest Airlines crash at Chicago ...I-Newswire.com (press release) - 2008 Presidential Contender Daniel Imperato expressed his condolences for the people that lost their lives during Thursday night's plane crash in Chicago...

Huh? What was this all about? A 2008 presidential contender comments on the Southwest tragedy? Here’s some of the text of his press release:

(I-Newswire) - West Palm Beach, FL - December 12, 2005 - Today, 2008 Presidential Contender Daniel Imperato expressed his condolences for the people that lost their lives during Thursday night’s plane crash in Chicago.A Southwest Airlines jet slid off the runway during a heavy snowstorm at Chicago's Midway Airport and crashed into at least one vehicle at a nearby intersection on Thursday night, a spokeswoman for Chicago's Department of Aviation said.“My sincere condolences go out to the family that was in the vehicle that was struck by Southwest Airlines Flight Number 1248 that took the life of the boy, as well as the passengers of the flight and their families. I reach out for the American people to have a moment of silence and prayer for the affected parties,” stated Imperato.

I wondered “Who is this Daniel Imperato?” Is he really a contender for a presidential bid? What is his background? What has he done in life? Who supports him? What does he stand for?

Some casual searching revealed that he claims to be a global entrepreneur based in West Palm Beach, with a background in Boston. I couldn’t find out much more. So I set up another Google Alert, looking for any new "news" items about Mr. Imperato.

To my astonishment, every day or so, Google News fired off an alert pointing to a new press release about Mr. Imperato, with pronouncements on his presidential bid, his thoughts on issues of the day, and word of support he’d garnered from various folks both domestic and international. Here are some examples:

Imperato Speaks Out About WMD and Supposed Bush Lies I-Newswire.com (press release) - USATonight Daniel Imperato spoke out about the recent stream of press regarding whether or not President George W. Bush lied about our intelligence and Iraq ...

It all makes for fascinating reading. Every day or so, Imperato issues a press release. He offers condolences after a tragic event. He comments on a foreign policy crisis. He criticizes Bush. He praises CNN’s Lou Dobb’s, noted of late for pandering on U.S. border security. Sometimes his thoughts were far-ranging: “2008 Presidential Contender Daniel Imperato on New Orleans, Cronkite, Iraq, and Mayor Nagin’s Martin Luther King Day Comments.”

And every time, every press release calls him a 2008 contender for President of the United States.

Who is this guy? Is he for real? Is he Pat Paulsen, Harold Stassen, or a real contender?

Imperato seemed to use Internet-based press release agencies to send out his frequent statements on matters of the day. But was the press actually covering any of these press releases? Or do the press releases alone just appear on Google News, without the actual media ever picking them up?

So I decided to test the system. I wrote up a press release about my recent trip to Key West, throwing in just enough legitimate quotes to make it appear to be serious. I used one of Imperato's channels, i-newswire.com, which purports to be a “free press-release distribution center” based in Fountain Valley, California. i-newswire has free and for-fee services; I paid the $25. (Imperato also uses openPR.com, based in Hamburg, Germany, so I sent a copy to them as well.)

After waiting a few hours, I found that my entire press release had been indexed by Google News. For instance, I could search for myself:

I could also search for any of the main search terms in my planted press release, and voila! There was the article on the Google News hit list. This worked, for instance, when I searched for Katie Hafner, the reporter for The New York Times that I mentioned in the article.

So this is how Imperato inserts himself into the Google News stream at will. I showed this phenomenon to friend and colleague Trevor Barnes, who runs one of the most popular message boards for fans of the Michigan State Spartans. In less than an hour, he'd posted his own press release, wishing Michigan State luck in the Big Ten basketball tournament.

And voila! Within an hour he was on Google News. 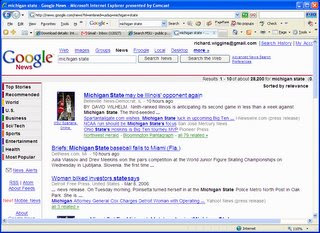 Trevor didn't bother to used the premium service fee, and not only did he get indexed in Google News; his press release went almost to the top of the hit list when you search for "Michigan State"!

But then, emboldened by Trevor's success, his friend Dave Mulder submitted a press release proclaiming his view of the NCAA basketball tournament as a "noted analyst" ... Dave is a student at Michigan State, a serious sports fan, and a contributor to Spartantailgate.com. But he readily says that "In no way am I a nationally known sports analyst." Yet right now, as I write, Google News lists "article" as the most prominent article on the state of the number one team in the nation. Excerpts from the press release from this "noted sports analyst" :

(I-Newswire) - As college basketball fans around the nation get ready for the NCAA Tournament, noted sports analyst David Mulder offered his predictions for the “big dance.”

“The two big favorites, as everyone has said all year long, are Connecticut and Duke,” said Mulder, “Nothing has changed there.” But what has changed are the outlooks of the other 63 teams which will participate in the NCAA Tournament.

Before the season began, Duke, Connecticut, Texas, Villanova, and Michigan State were the top five teams in the country, according to the ESPN/USA Today Coaches Poll. This week, the Spartans are not even ranked nationally, although they did receive votes.

The bracket has not even been picked by the Tournament Selection Committee, but Mulder is already offering a short list of teams from which the national champion will emerge. In addition to Duke and Connecticut, “Texas, Villanova, and Memphis are the teams with the best shot of cutting down the nets in early April,” said Mulder.

So who’s it going to be?

“There’s no denying that the [Duke] Blue Devils were the overall favorite heading into this season, but they’re not going to win this thing. Connecticut- with Rudy Gay, Josh Boone, and Marcus Williams- this is their year, they have an incredible amount of talent and some experience to back it up. The Huskies and Jim Calhoun are going to win the national championship.”

Why should David Mulder’s opinion be worth anything compared to the hundreds of other analysts? For one thing, he’s correctly predicted the NCAA Tournament champion for the last seven years.“I’ve been right a lot, and this year I feel as strongly as I ever have.”

The examples of Barnes and Spartantailgate, of "noted analyst" David Mulder, of my own -- and let us not forget Mr. Imperato -- clearly demonstrate that it is trivially easy to insert content into Google News.

Obviously this raises a lot of questions about what sources are indexed by Google News and whether Google News hasn't grown way beyond the parameters of an index of bona fide media outlets.

In any event, once word gets out on this, I can imagine lots of bloggers submitting "press releases" with their daily blog entries, enhancing their visibility by spamming Google News.